The Sea Duck Joint Venture (SDJV) launched an ambitious, large-scale satellite telemetry study of sea ducks in the Atlantic Flyway in 2009, with more than 300 transmitters deployed so far by study partners. Target species include all three scoters (black, surf, and white-winged) and long-tailed ducks. The overall goal of the study is to improve our understanding of the links among breeding, wintering, staging, and molting areas (i.e., population delineation) for these species, which is essential to understanding sea duck declines and limiting factors. In addition, the study is identifying the spatial and temporal habitats most important to sea ducks, thus helping to evaluate potential impacts from multiple sources. This project is complementary to other ongoing studies of marine birds in the Atlantic, including a BOEM study assessing diving bird use of offshore areas along the mid-Atlantic coast. 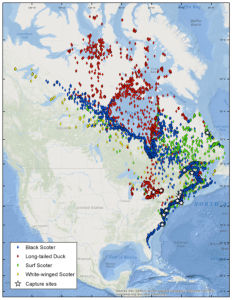 Geographic extent of locations determined from satellite telemetry of sea ducks marked along the Atlantic coast and Great Lakes. Points represent the best location per duty cycle. Locations are cumulative through 22 October 2014 (all birds, all species).

The study is greatly improving our understanding of migration patterns and range affiliations for sea ducks in eastern North America and is yielding results that will be useful for management purposes.

Some of the more notable results include:
1. Areas of particular importance to wintering sea ducks include the area around Cape Code and Nantucket, the eastern end of Long Island (not sure if that is considered LI Sound), Delaware Bay, and Chesapeake Bay.
2. Emerging evidence of structuring among wintering populations of long-tailed ducks, one wintering primarily off the coast of Nantucket, MA, another wintering in Chesapeake Bay, MD, and another wintering in Lake Ontario.
3. The SDJV is looking at getting all data from this study, plus additional sea duck surveys , into a geospatial database to better inform stakeholders.

For more information on this project, please contact Chris Dwyer, or read the full report.