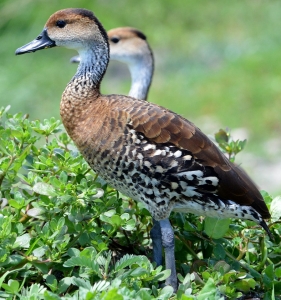 Most recently, the BCR Plan for Puerto Rico and the U.S. Virgin Islands (USVI) was completed, titled “Avian Conservation Planning Priorities for Puerto Rico and the U.S. Virgin Islands (BCR 69).” This plan reflects years of effort to observe, document, and synthesize information about birds and their habitats in Puerto Rico and the USVI. Currently, 284 species are known to occur in the region, 17 of which are endemic. Human land-use has had an enormous impact on avian populations in the Caribbean, and this plan discusses historical and present habitat threats, conservation opportunities, and management strategies to protect important native and migratory birds in Puerto Rico and the USVI. Some important species highlighted in the plan are the Puerto Rican Parrot, West Indian Whistling-Duck, Elfin-woods Warbler, Yellow-breasted Crake, Red-billed and White-tailed Tropicbirds. The plan mentions several species of concern that are familiar to us in the mainland US: Piping and Wilson’s Plovers, Grasshopper Sparrow, American Bittern, and Blue-winged Teal. The number of species and diversity of habitats on those islands represent a unique opportunity and challenge to partners involved in bird conservation.

The only remaining BCR Plan yet to be completed in the ACJV covers Peninsular Florida (BCR 31); planning for this region is now underway, with fall of 2016 as the target date for completion. This region is entirely within Florida and represents many unique challenges, habitats, and species, including high profile species like Florida Scrub Jay, Grasshopper Sparrow, Snail and Swallow-tailed Kites, Painted Bunting, Reddish Egret, Burrowing Owl, Gray Kingbird, and Mangrove Cuckoo. BCR 31 includes the southernmost subtropical portion of Florida influenced by fire, rainfall, and hurricanes, and which transitions northward to the more xeric plant communities in Florida, also heavily influenced by fire. A few major habitat types are of high concern in BCR 31:mangroves, grasslands, maritime scrub, pine forests, and the vast Everglades ecosystem. Human population stresses are a major influence in Peninsular Florida, with private lands playing a major role in conservation strategies in the more xeric and upland areas, and public lands playing a large role in the subtropical region.

There is an abundance of high-quality conservation planning products available in Florida, so our efforts will focus on synthesizing existing plans to provide conservation partners with the ability to target the most important and effective conservation efforts needed for birds in Florida. The final plan will include a list of priority species and habitats, focus areas to target conservation, population and habitat objectives for key species, and conservation strategies and programs for partners to use to deliver conservation in Peninsular Florida.