For each of our flagship species, we aim to create population objectives tied to habitat objectives. Having such objectives makes it easier for partners to understand their piece of the conservation equation and to coordinate efforts and measure success against a common goal. In the Fall of 2016, ACJV staff worked with the Saltmarsh Habitat and Avian Research Program to set an objective for the Saltmarsh Sparrow – to sustain a population of 25,000 individuals. 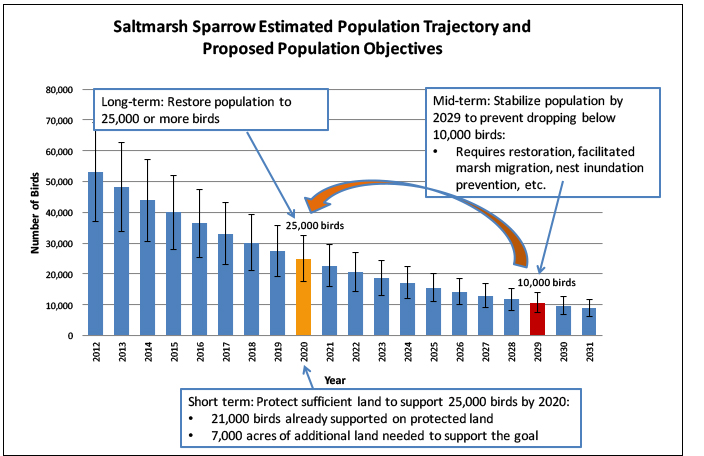 Saltmarsh Sparrow population declines are severe and the population will invariably slip below its’ set objective – possibly to as low as 10,000 birds. For this reason, the goal is multi-phased – protect, restore, recover. The approach is to protect enough habitat to support the population target while also promoting  aggressive marsh restoration, enhancement and prevention of nest inundation over the next 10+ years (see Figure). This approach requires a coordinated effort to successfully restore the population of Saltmarsh Sparrows. If successful, the full suite of tidal marsh specialist birds will benefit as well.

The Saltmarsh Sparrow population objective is already gaining traction with partners. The FWS Partners for Fish and Wildlife and Coastal Programs in the Northeast have included the objective as a primary focus of their new strategic plan. Likewise, cross-programmatic efforts within the FWS to develop a Northeast Coastal Resiliency plan will also adopt the ACJV flagship species – and population objectives as they are developed – as a key focus of the plan.