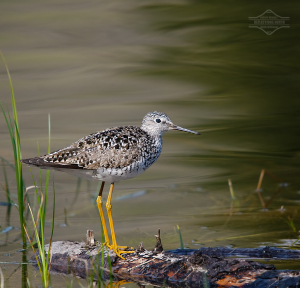 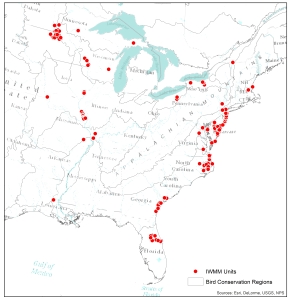 Distribution of IWMM sampling sites in the Mississippi and Atlantic flyways and across 15 BCRs.

Participation in the IWMM approach will enable land managers to document the timing of waterbird movements, the amount of waterbird use and habitat conditions, manage their data and generate reports via an online database, and evaluate their management actions. In addition, IWMM has developed decision support tools that will enable multi-scaled waterbird habitat management decisions to be made in a structured, transparent, and defensible fashion. To determine a site’s potential contribution to survival during migration, IWMM developed a spatially explicit model of waterbird(i.e. mallard) migration. This “flyway model” simulates mallard migration (plans are to model shorebirds and long-egged wader migration as well) as a function of caloric gains and losses, and incorporates GIS inputs (e.g., landcover, breeding and wintering range maps, population estimates, roosting quality, forage availability), and information in published studies of waterfowl food habits, flight speeds, travel distances, etc., to move mallards across a continental landscape. This decision support tool provides managers with information about the value of a particular area to waterfowl (mallards) in the larger landscape and increases our understanding of how to manage (e.g., acquire, protect or restore) habitat for the conservation of migratory waterbirds. Ultimately, IWMM aims to enable decision-makers to ensure that non-breeding waterbirds have the right habitat, in the right place, at the right time.