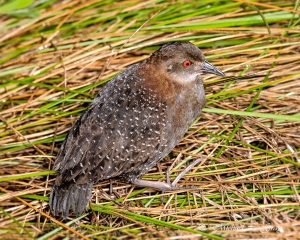 Special consideration was given to NAWCA proposals that considered ACJV focal species like the Black Rail. Michael Gray

Albemarle/Chowan Wetlands Conservation Initiative – Phase 2 (VA) will permanently protect 2,456 acres, including an easement on 1,275 acres of coastal wetlands (and 1.5 miles of frontage on the North Landing River, part of the Intracoastal Waterway) including 700 acres of globally rare wind-tide oligohaline marsh and scrub-shrub habitat transitioning into 575 acres of cypress-tupelo forest.

Carolina Wetlands Initiative Phases III & IV (NC & SC) permanently protected 5,000 acres, including several parcels (and >1,000 acres) located on the coast, with the rest on tidal rivers like the Cape Fear and Pee Dee.

Chesapeake Rivers Conservation Phases I & II (MD)  permanently protected ~4,900 acres on Maryland’s Eastern Shore, including nearly 3,300 acres of wetlands. Most of the protected tracts include high-quality saltmarsh, or buffering uplands needed for marsh migration in the future.

Connecticut Coastal Initiative II (CT) will result in the protection of nearly 2,000 acres near the coast of Long Island Sound, as well as the restoration/enhancement of  over200 acres. This project will conserve over 200 acres of prime habitat for Saltmarsh Sparrow, including tracts with some of the most extensive habitat in the state for this species.

Sansavilla Phase III (GA) permanently protected ~600 acres of saltmarsh on the Georgia coast, near Little St. Simon’s Island, as well as adding over 2,600 acres to the 164,000 acres of protected lands along the Altmaha River.

South Carolina Wetlands Lowcountry VIII (SC) will protect 1,848 acres and enhance 613 acres, which include hundreds of acres of tidal freshwater or saltwater wetlands.

Texas Plantation Protection and Wetlands Restoration (NC)  will protect a 1,453 acre property and restore the hydrology on 251 acres of palustrine emergent wetlands on six managed wetland units on the Texas Plantation, which is part of North Carolina’s coastal Alligator River system.

Cape May Delaware Bayshore Acquisition Project (NJ) will acquire and protect a 210-acre property known as Delsea Woods in Cape May County, New Jersey, which includes decreasing coastal wetlands types, along with beachfront and a seasonal recreational vehicle campsite and associated structures that will be removed and demolished prior to acquisition. Delaware Estuary is a globally significant stopover site for shorebirds, raptors, and other Neotropical migrant birds;  it is a Ramsar wetland of International Importance; and is one of the few US sites designated as Hemispherically Important by the Western Hemisphere Shorebird Reserve Network.