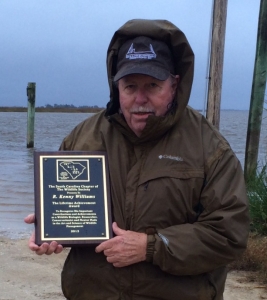 R. Kenny Williams, a long serving biologist in South Carolina, recently received the Lifetime Achievement Award from the South Carolina Chapter of The Wildlife Society. For nearly 50 years, R. Kenny Williams has been positively impacting waterfowl and wetlands science, conservation, and outreach in the South Atlantic Coastal region, especially in South Carolina. Kenny graduated with a B.S. degree from Wofford College and then earned a M.S. degree in Wildlife Management from Auburn University. He was the manager of Kinloch Plantation for the DuPont and Turner families in Georgetown, SC for 22 years, followed by serving as Regional Biologist for Ducks Unlimited in South Carolina for 10 years, and, since retirement, has been a land management consultant in coastal South Carolina. At 72 years, he continues to monitor conservation wetlands for DU and write baseline biological assessments for DU conservation easements. He also engages frequently in outreach, providing advice to public and private landowners. Kenny is also a dedicated supporter of the TWS and is a certified wildlife biologist of TWS.

There are only a handful of colleagues in South Carolina and along the South Atlantic Coast that possess the wetland ecological and management expertise that is so characteristic of Kenny Williams. Kenny and several other South Carolinians wrote the chapter on Management of South Atlantic Coastal Systems for the TWS 1991 award winning book, “Habitat Management for Migrating and Wintering Waterfowl in North America.” These authors were invited to write this chapter because no other individuals in the Atlantic Flyway had greater knowledge on the topic than them. Kenny also is a noted author of other scientific and management related publications such as being senior author of “Management of South Atlantic Coastal Wetlands for Waterfowl and Other Wildlife”, a publication supported and partially funded by the Atlantic Coast Joint Venture. Kenny has been a strong friend, supporter, and dedicated manager/biologist for wetland resources in South Carolina and the South Atlantic region, and a great asset to the Atlantic Coast Joint Venture. Congratulations Kenny!