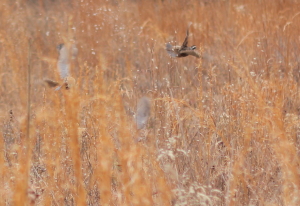 For decades, South Carolina was a homestead for vibrant populations of bobwhite quail. Most baby boomers remember hearing the telltale whistle in rural patches of land and seeing coveys flush from roadsides and fence rows on every outing. Changes in land use, however, diminished these once healthy populations to the point that bobwhites are now seen only occasionally across the state. Estimates are that their numbers have declined by 80-90% since the early 1980s.

In December 2014, a handful of landowners and 24 organizations gathered to discuss a solution. With guidance from a plan written by the SC Dept of Natural Resources, the group, known as the South Carolina Quail Council, committed to the ambitious goal of more than doubling the statewide bobwhite population over the next 10 years.

Such a massive conservation project could not succeed without the contributions of the Council members, a group that includes the Atlantic Coast Joint Venture, SC Dept of Natural Resources, NRCS, Audubon, The Nature Conservancy and the National Wild Turkey Federation. From land to expertise to manpower, each partner brings a unique set of resources to the project. The seminars and field days conducted by these organizations offer an excellent opportunity to spread the word about the SCBI and to educate private landowners about the changes necessary to increase bobwhite populations across the state.

Private landowners will ultimately hold the key to success in this effort. With almost 95% of the land in the state held outside the public domain, individuals and corporations who agree to make bobwhite-favorable habitat changes on their property will create the bridges needed to connect and enhance the public lands that are being actively managed for healthy quail populations. Landowners will be eligible for assistance from professional biologists in developing a plan for their property, hands-on expertise in implementing the changes, and in many cases cost-sharing to implement beneficial habitat practices.

In early 2015, four initial Focus Areas were selected, where parcels of land will be managed intensively for bobwhite, and where results will be closely monitored to measure progress. The Indian Creek area of Sumter National Forest in Newberry and Union Counties, the Oak Lea WMA in Clarendon County, Carolina Sandhills National Wildlife Refuge in Chesterfield County and the Webb Wildlife Center WMA in Hampton County will serve as foundations of the project, the centerpieces from which the work will grow and spread across the landscape as neighboring landowners join the effort.

If you’re a landowner in or near one of these Focus Areas and are interested in being part of this extraordinary conservation challenge, contact SCDNR Small Game Project Supervisor Michael Hook at 803-734-3940 or email him at HookM@dnr.sc.gov.